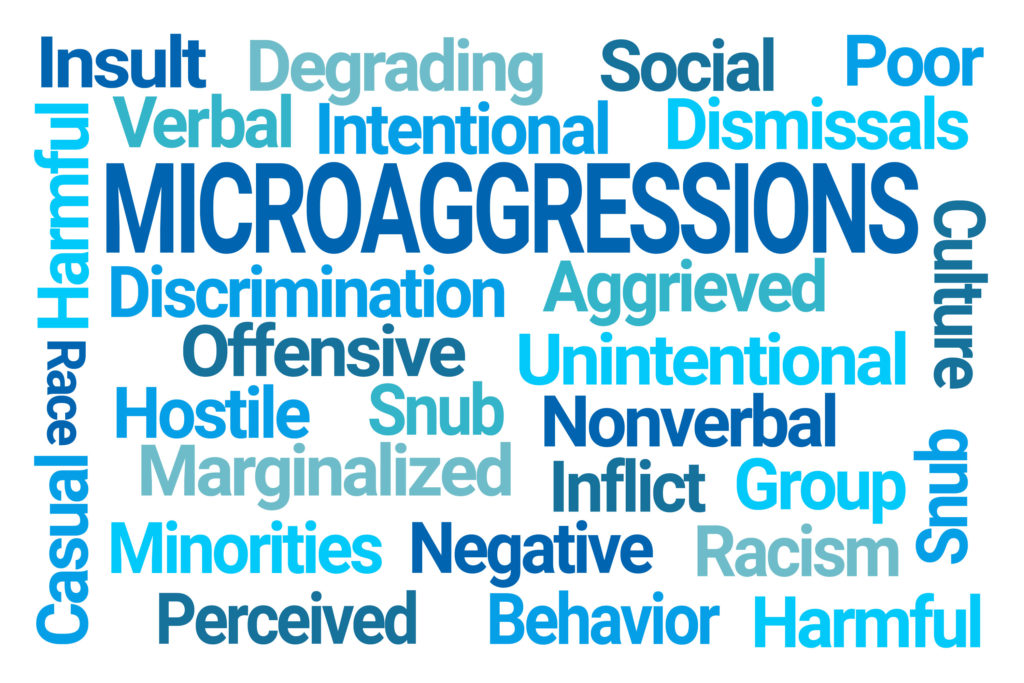 Just imagine that some of your coworkers suggested you wear your natural hair “neater,” asked you to tone down your animated way of speaking, or talked over you during staff meetings.

Would you be surprised to learn that these are all examples of microaggression? The word aggression speaks for itself; the micro part infers that the bias, or slight, happens at a miniscule level, usually between individuals. In other words, it’s barely noticeable, but there nevertheless.

The term was coined by Harvard professor Dr. Chester Pierce. Microaggression is interwoven with negative stigmas. Every day, black people face microaggressions that are derogatory, expressed both verbally and in body language.

Questioning a black person who speaks ‘properly,’ the view that dreadlocks look dirty, or a store owner following a black customer, and not a white one, because of a fear of shoplifting, are all common examples of microaggression.

According to Psychologist Derald Wing Sue, microaggression is “brief and commonplace daily verbal, behavioral, or environmental indignities, whether intentional or unintentional, that communicate hostile, derogatory, or negative prejudicial slights and insults toward any group, particularly culturally marginalized groups.”

The casualness of microaggressions and the harm that results has been highlighted many times due to current racial events in mainstream media and on social media.

But these slights happen to other people of color and persons with disabilities, as well as women and persons who are part of the LGBTQ community. And examples of microaggressions have become a popular topic of discussion, whether inside private homes or online forums.

In the C-CRETS podcast episode ‘Combating Microaggressions,’ we share with listeners that part of climbing the corporate ladder entails understanding microaggressions and not getting distracted from one’s goals because of them, in order to navigate these commonplace workplace bombs.

The truth is that microaggressions are all about maintaining structure.

Microaggressions are all about trying to keep you in your place, while someone else maintains their power and privilege over you. That’s what it’s all about and that’s why they’re so impactful.

Microaggressions can have a serious impact on your career trajectory, leaving the victim stalled in the workplace.

In our podcast, we also share examples of our own experiences with microaggressions, along with the negative outcomes that can result from this sort of coded language.

The world tells people once you’re not white that your desires are dangerous–for a better house in a safe neighborhood, for quality education, for wanting to build generational wealth. Economics is tied to career advancement, and by participating in microaggression, whether it’s intentional or not, persons play a part in the systematic oppression of those unlike them. Persons who contribute to microaggression in the workplace are one of the key inhibitors for underrepresented employees in reaching the top levels.

So how do you combat rhetoric that undermines you in the workplace?

Here are four C-CRETS to dealing with workplace microaggressions.

Be graceful in your response.

Respond with a factoid that stops them in their tracks and that will lead them to think about what they’ve just said. In any response to a microaggression, be prepared for the person to react defensively.

Use it as a teachable moment

Let them know that the comment is problematic, since it’s negative in nature. Highlight how the comment may pose a problem with you feeling comfortable   being your authentic self in the workplace.

On the flip side, you can also ask them to clarify the meaning of their comment, giving them a chance to articulate what they meant so that there is no misunderstanding.

This creates a pause in the moment and a “safe space” for further interaction. A conversation can then be had about the microaggression.

You can choose to ignore it and move away from the person. In addition, moving away might include speaking with your immediate supervisor or a member of Human Resources. Remember their responsibility is to stop this sort of behavior within a professional setting.

Relieve the stress and confide in a confidant

Sometimes the best response is to talk to someone trustworthy about what took place. Never internalize the microaggressive moment. Remember you are at work to achieve a goal, and dealing with microaggression should not be part of your job.

Because microaggression in the workplace happens daily, responding to it does take professional courage. However, you don’t want to be left feeling uncomfortable at work, as we spend a significant amount of our lives in this setting.

By handling the matter using one of these four suggestions, it should lead to greater understanding between you and your colleague in the workspace.